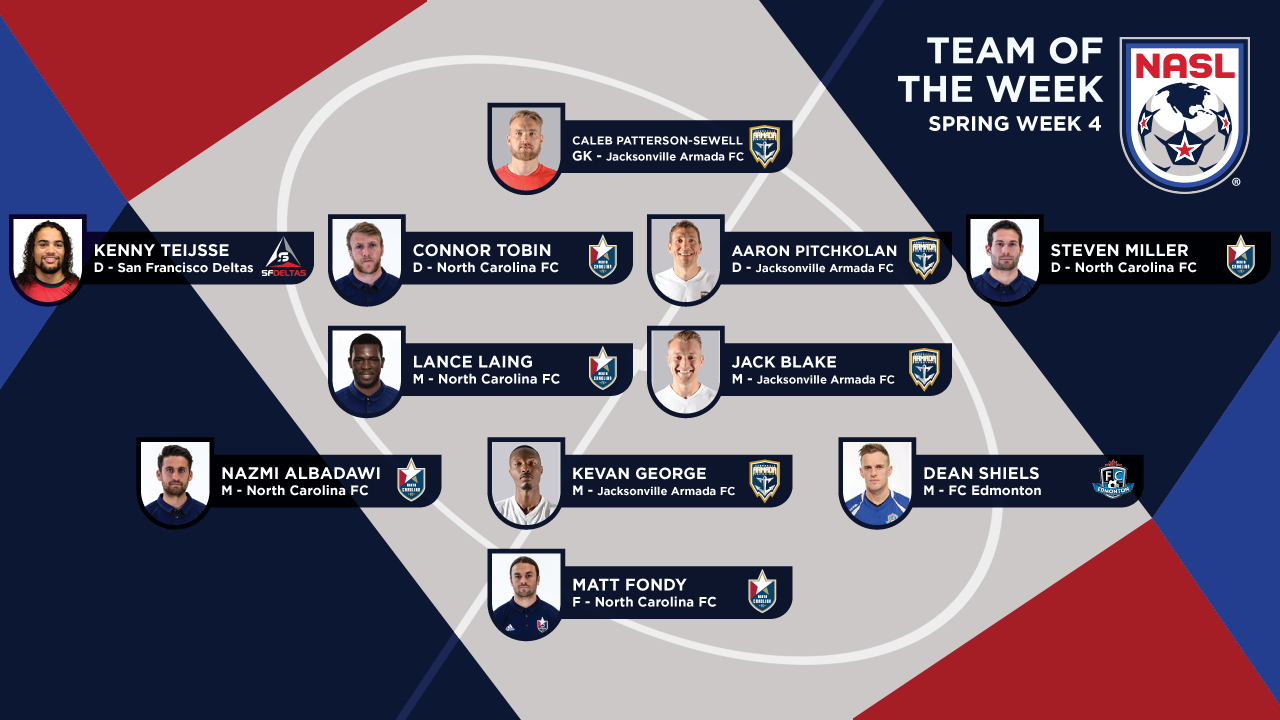 Shiels named to NASL Team of the Week for performance against North Carolina
April 19, 2017
by
NASL Communications

FC Edmonton’s Dean Shiels’ offensive performance against North Carolina FC earned the Northern Ireland product a place in the North American Soccer League’s (NASL) Team of the Week on April 19. In the other match up, Jacksonville Armada FC maintained its place atop the standings, and grabbed several selections as well.

The full list of top performers from Week 4 can be found below:

GK: Caleb Patterson-Sewell (Jacksonville Armada FC) – The Jacksonville shot-stopper continued an impressive stretch for the club, adding a third clean sheet in a row to start the season. He made a pair of saves to keep the shutout against the San Francisco Deltas in the 0-0 draw, which kept Armada FC atop the standings.

DEF: Connor Tobin (North Carolina FC) – The veteran made seven clearances, won six of his seven duels, and won both of his tackle attempts in the 3-1 win over FC Edmonton.

DEF: Aaron Pitchkolan (Jacksonville Armada FC) – The veteran center back helped Jacksonville keep a clean sheet and also helped control the tempo of the game out of the back for the club. He completed 83 of 97 passes, touching the ball 100 times. He also made two clearances.

DEF: Steven Miller (North Carolina FC) – He made three clearances and two interceptions in the win over FC Edmonton, while contributing at the attacking end. The defender completed 34 of his 39 passes and had an assist with a great cross for the club’s third goal.

MID: Lance Laing (North Carolina FC) – The Jamaican international scored on a screamer from a free kick in the fourth minute to set up the home side for the victory. Laing was dynamic throughout the contest in his first match back after suffering a concussion.

MID: Jack Blake (Jacksonville Armada FC) – The young midfielder won six duels and both of his tackles. He also provided a threat going forward, creating two chances and coming close to scoring himself in the draw.

MID: Nazmi Albadawi (North Carolina FC) – The club’s captain created seven chances and scored a goal of his own with a strike from distance in the big victory.

MID: Kevan George (Jacksonville Armada FC) – The Trinidad and Tobago international was steady in the midfield once more, completing 69 of his 78 passing attempts. He also made three interceptions.

MID: Dean Shiels (FC Edmonton) – The Eddies were unable to grab points on the road, but Shiels provided an attacking spark. He created three chances and had the assist in the loss to North Carolina FC.

FWD: Matt Fondy (North Carolina FC) – The forward drew the foul that led to the opening goal and then he scored early in the second half. His efforts earned him Player of the Week honors.