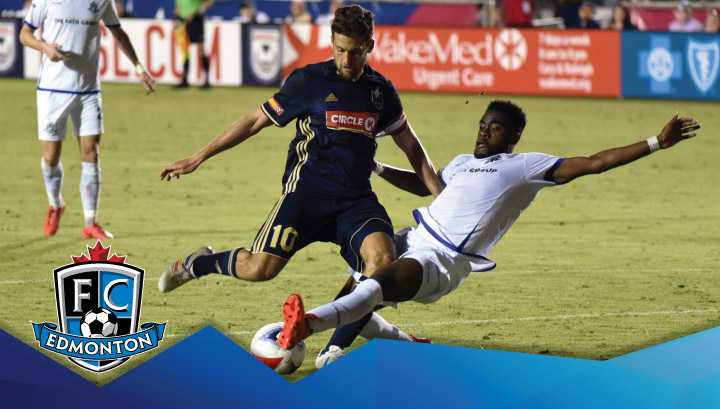 Zebie came off the bench to replace midfielder Nico Di Biase in the club’s 3-1 loss to NCFC this past weekend, earning the Paris-born defender his first minutes of the 2017 campaign. Zebie displayed his versatility as he stepped into the holding-midfield role and completed 96 per cent of his passes in 49 minutes of play despite playing a majority of his matches in defence for Edmonton.

“It was a little different playing in midfield, but I played there when I was growing up and enjoyed it,” Zebie said. “I can run a lot, win tackles and I am a simple player who likes to play with one or two touches. I think I can help out defensively in the midfield, but it really doesn’t matter much to me. Wherever I can help the team the most, that’s where I will play.”

Zebie offered Edmonton defensive stability as he entered the fray in the first half and the 23-year-old was also a key factor in the eddies maintaining possession in the second half. However, Zebie feel there is still lots of room for improvement in his midfield game.

The academy product is one of two Edmonton players who played youth soccer locally. Zebie and Marko Aleksic are two local boys who continue to carry the torch for home grown players competing in the NASL. Representing your local team is something Zebie takes a lot of pride in every single time he puts on the FC Edmonton jersey.

“We want to be an example for the academy kids,” Zebie said. “I feel it’s important because we have a bunch of academy kids who want to play for the first team. I feel like Marko [Aleksic] and I owe it to them and to show them the right way of making it. We’ve always had a few guys from the academy on the team and hopefully we can keep that going.”

FC Edmonton looks to use Clarke Stadium to its advantage to break its slump this Saturday, April 22 at 7:00 PM MT against Puerto Rico FC. Tickets are available for purchase at tickets.fcedmonton.com! Go #AllTheWayUp with the club on social media this season by using the hashtag to win prizes and help reveal the history of soccer in Edmonton, both past and present.